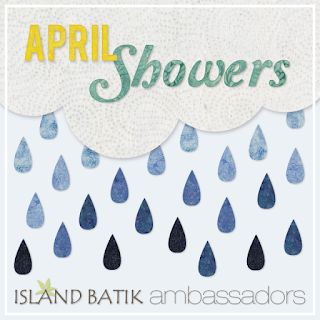 Our challenge this month is April Showers ....I'm sure hoping that they bring May Flowers!

Using my Accuquilt die cutter and beautiful #IslandBatik fabrics, I cut these cute umbrellas. Now what to do with them????

So, here is my challenge to you, the reader ....if you were to receive these cut shapes as a gift (unattached to anything) what would you want to do with them? The most appealing, to me, answer will receive them. This will be open for suggestion through April 30.
Posted by Marlene @ KISSed Quilts . com at 7:07 AM 23 comments:

Been a long while since any of my old WIP list made progress....but after checking on Freshly Pieced for the linkup, I learned that back in February Lee suspended her WIP Wednesday linkup. ...alas, I will post this anyway and feel good about getting a few things crossed off the list and progress on others. I just found another linkup at

Completions:
Heartfelt Holiday -- more details were in this post. 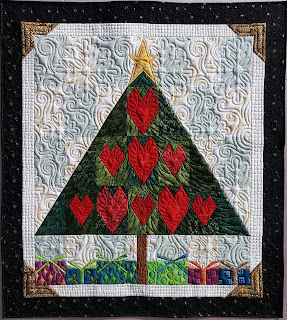 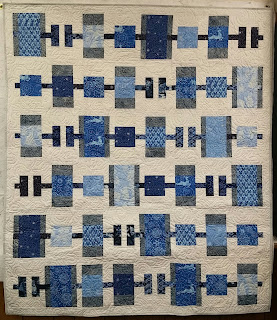 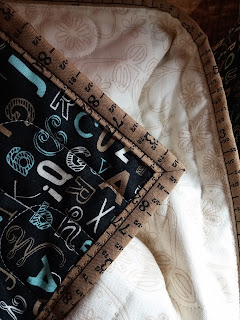 Charmed Network - Elementary --excited to finally get this one done from last year. Originally a class sample of my own design "Charmed Network" available at Craftsy, it will ultimately end up on my parent's guest bed. My mom taught high school math for 40 years and in retirement substituted at several elementary schools showing students that math can be exciting. Some of the fabric has math equations, network diagrams and alphabet letters. It seemed like a 'cool' set of colors to help cool down their guest room in Arizona. I quilted it with 'Retro Graphics 2' pantograph - hand guided- from UrbanElementz and did a completely by machine binding. This week I'm on retreat at Lutherhaven on Lake Coeur d'Alene, so after completing the binding yesterday I was able to hang it over the fence so you could see the beautiful lake in the background. 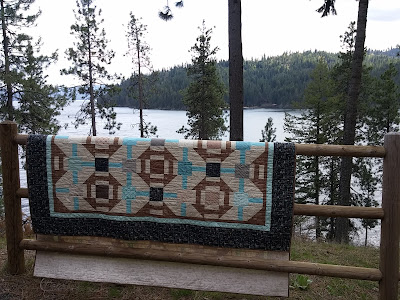 WIP:
Fall Wallhanging -- ok I got the top finished finally! This really evolved since my original concept in my EQ tutorial in 2012....but had fun creating the turkey block with some very fussy fabric elements in context of the paper piecing of the feathers. The leaf blocks were a happy accident after making them too large for a commission so I decided to incorporate them into this piece. The corn fabric between the leaves allowed it to be more than just a blank background, but let the flow of the design still work. The outside border became bigger than originally planned and what fabric allowed without doing some special piecing, so decided to throw in the orange pumpkin fabric. I initially thought an asymmetrical addition, but ultimately decided on this symmetrical effect. Now it is ready to quilt! 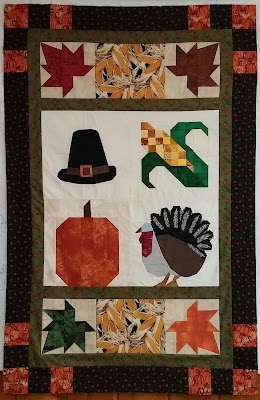 Started a new project, this is an INMQ 2016 challenge. A table runner...and now to quilt it (which is the real challenge part!) No extra embellishments allowed, just thread in the quilting. Show is in October but it has to be done by September, so the plan will be to work on it this summer.

March Mini Madness ----this will become something functional and unexpected. Ready to quilt. Beautiful #IslandBatik fabrics being used here. 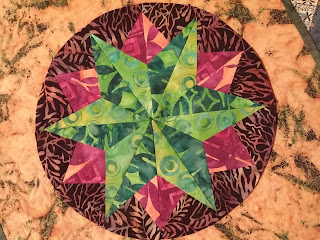 Row by Row 2015/2016 - Road Trip samples
I'm working on putting together some "Road Trip" samples (available at Craftsy) that use 8 (9" x 36" rows --often found during the Row by Row Experience (tm) that happens in the summertime. Last year was my first year to participate and my "Grand Coulee Dam Light Show" row did well. This quilt design also was a big hit and I sold out of my finishing kits twice! I'm gearing up for doing it again this year, but with different border fabrics including the latest coordinating prints from Timeless Treasurers, designed by Debra Gabel of Zebra Patterns. While on retreat this week I'm working on finishing up 16 rows so that I can put last year's and this year's versions together. My shop winner was the 'tester' if you will with last year's quilt.

These are the ones I'm using in my 2016 version (although these are 2015 'water' themed rows) but all have a geometric style to them. Are any of these rows familiar to you? 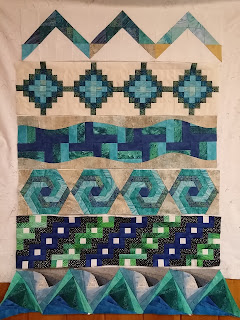 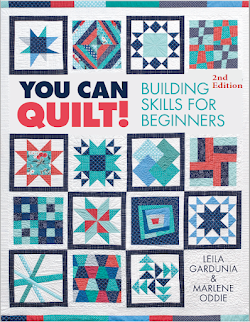